Not sure where this pic was snapped, but it comes from Board Game Geek's Twitter feed: 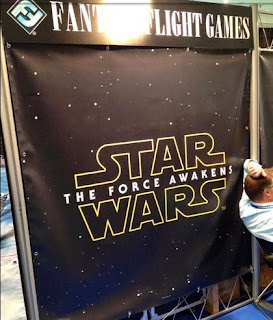 So what does this mean? Well, seeing how FFG has a pretty awesome set of role playing game rules, the amazingly popular X-Wing miniature combat flight sim, Star Wars card games (Empire v. Rebellion and the LCG), the forthcoming Armada (yay capital ships!) and the very new Imperial Assault, it's not like they're hurting for choices.

I could easily see quick expansions for X-Wing, Armada, and Imperial Assault since those are some of the newest, most visible, and popular Star Wars properties that FFG has out right now, and FFG doesn't have to rely upon Disney/Lucasfilm for clarification.

Follow up releases to the card games and the role playing game could come as a second wave to renew interest in those lines as well. Of course this is simply speculation, but it's a good time to be a Star Wars and gaming fan!
Posted by Cliff at 11:42 AM No comments:

The Conan board game Kickstarter came to an end today and topped out at $3.3M! 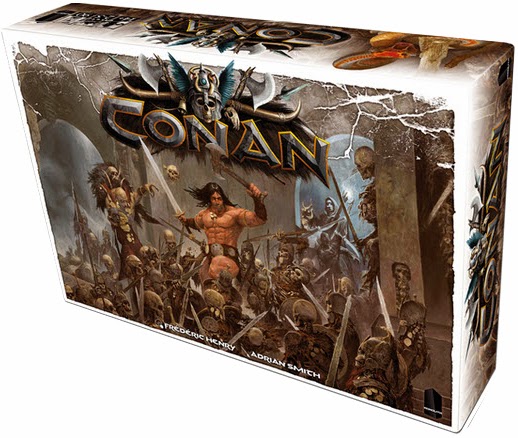 Congrats to Monolith games for one helluva successful Kickstarter campaigns. I'm looking forward to getting my copy of the game and all of the crazy stretch goals.

Hey out there to all my board game and card game fans! Chicagoland's own Adepticon 2015 has put together a board and card game weekend badge. The weekend badge is $25, and it gets you access to the library of games, and enters you into the Play to Win competition where you can play up to 30 different board games for a chance to win a copy of the games you’ve played!

The badge does give you access to the convention, but you won’t be able to register for any of the other events, nor will you receive a swag bag. That being said, Adepticon is an amazing long weekend (18 March to 22 March) and it’s one of several great MidWest gaming conventions.

This year's Adepticon is being held at the Renaissance convention center in Schaumburg, a new larger venue for one of North America's best wargaming (and now board gaming) conventions.

Preregistration ends on 22 February at 8pm CST. Visit www.adepticon.org for more information and to register!
Posted by Cliff at 7:44 AM No comments:

A small update to share a bit of WIP on a Freikorps Strong Arm suit. Or auf Deutsch: Starken Arm Anzug. Which sounds much more bad ass. Without further ado: 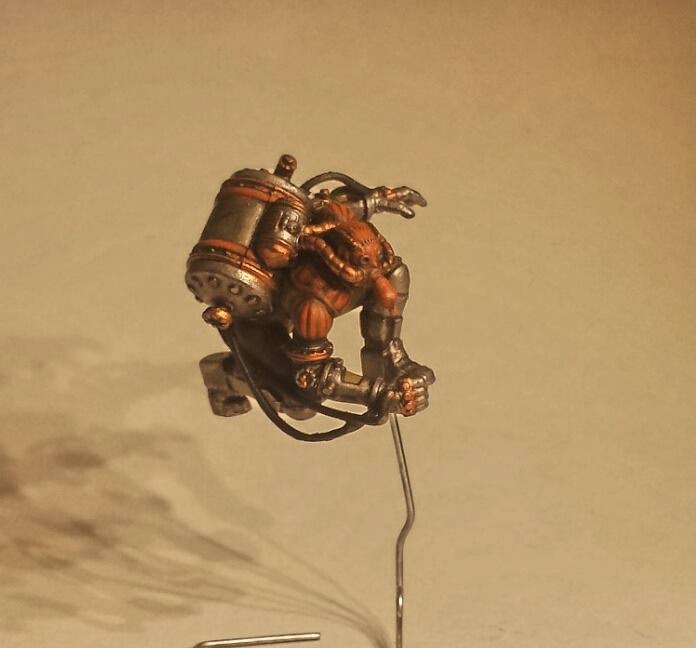 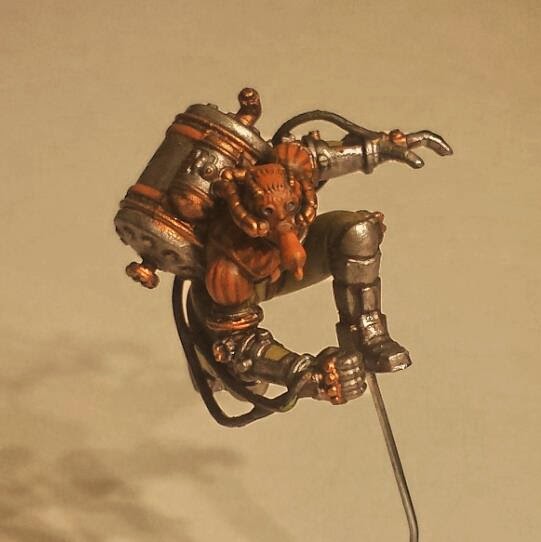 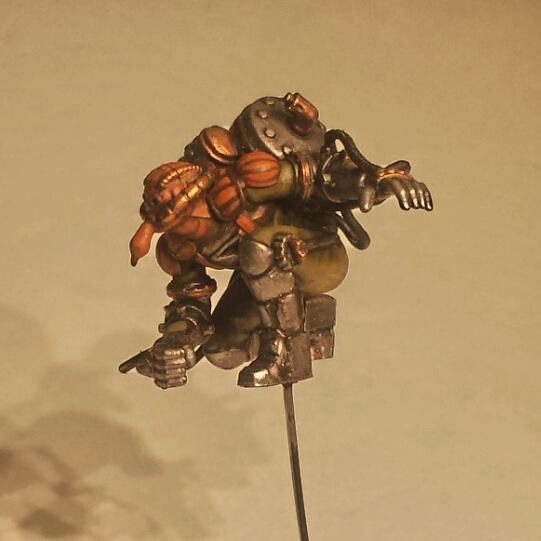 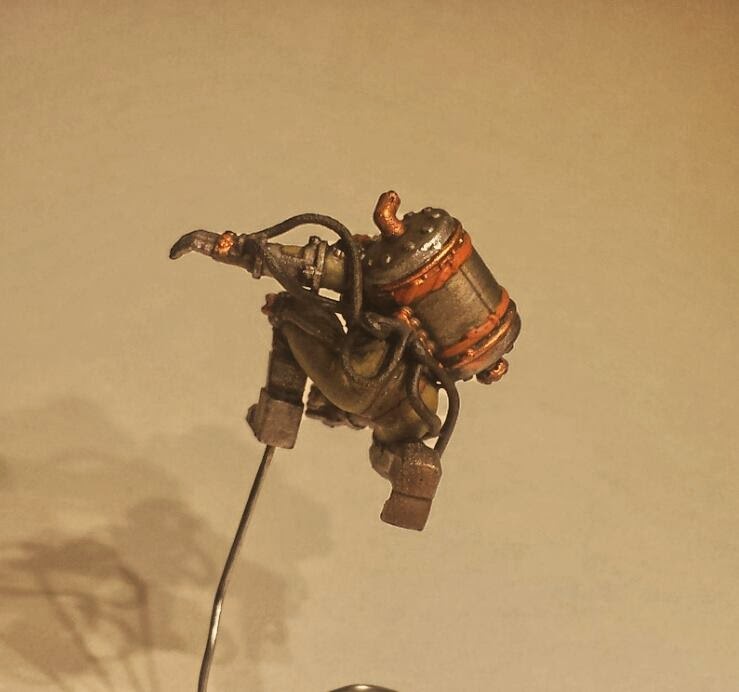 As always, comments and questions are welcome!

Wyrd Miniatures has released a sneak peek at the art for the Peacekeeper model:


I like the way that it's using one set of arms for locomotion/stability. Though looking at it and considering base sizes it might be tricksy to get it to fit on a 50mm.
Posted by Cliff at 9:26 AM No comments:


As gamers we’ve all busted out that board before, scrambled to get the token we want before anyone else grabbed it, and even had arguments whether there should be a pot of cash associated with Free Parking (there shouldn’t, you damn heretics), but we’re not here to chat about the game that is the epitome of Ameri-trash gaming and the Objectivists' ideal of the American Economy. We’re gonna talk about the Evil Empire. Big Brother. The game company we all love to hate: Games Workshop.
And we’re going to consider it from a strictly economic point of view.

Caveat: I am not an economist. I like economic theory. There are folks who get paid relatively well to be economists and they can probably explore and expound on the points I’m touching on here in much greater detail. The goal of this article is to provide a soupçon of information and have fun doing it.

One Seller of a Good without a Close Substitute
This is the one that skews the curve a bit. While they distribute through game stores, via their own retail spaces, and though their own web store, products for Games Workshop games are only produced by GW itself which meets the criteria for a monopoly.

There are close substitutes (alternate models from Mantic, MaxMini, Kromlech, etc.) and other games you can play (Malifaux, Warmachine, Flames of War, etc.), which is why back in the day GW had the thou shalt have no other models in your 40k army than GW models commandment in place at tournaments and in their stores. Why would you even give another company a chance to steal your customers? You wouldn’t. It’s just not good business.

And I believe we’ve all seen GW make the argument that there is no close substitute for the GW Hobby Experience™. Again, this is a way to protect their share of the market and reinforce the message that the best GW fans only play with GW products.

High Barriers to Entry
This doesn’t refer to the prices we have to pay to pick up a new set of space marines, it refers to the challenge a new company has if they wanted to start production at the same scale as GW. Over the past decade we’ve seen upstart companies (Privateer Press, Wyrd, Battlefront, and others) begin to cut into GW’s market share, but they’ve done it by starting small and slowly building their business.
Again, there is a bit of a technicality in that someone with sufficiently deep pockets could swoop in and set up a competing company, but the investment would be pretty large and probably privately financed as getting shareholders to invest would be difficult (but not impossible).

Significant Market Power
This is where GW really looks like a monopoly. The only way to buy their product on the internet is via their web store (caveat: and eBay where they have no control at all, but eBay is kinda the wild west of retail anyway).
As a brick and mortar independent retailer there are really only two ways to carry GW product:

God forbid if, as one of their trade accounts, you don’t play ball the way that they want you to, you’ll be cut off tout de suite.

GW also sets and controls the market price on products by releasing a limited amount of product (special releases, limited editions, etc.) ensuring that the customer must deal directly with them for certain product. The only organizations that fit the standards of a monopoly better than Games Workshop are OPEC and De Beers, and GW should only wish that the aftermarket for its product was as drastic as the resale value of diamonds (which typically drop in value by 50% the second you step out of the store and are usually only reach a resale value of 35% at best).  (Marketplace, 2013)

“The next time you look at a diamond, consider this. Nearly every American marriage begins with a diamond because a bunch of rich white men in the 1940s convinced everyone that its size determines your self worth. (sic) They created this convention - that unless a man purchases (an intrinsically useless) diamond, his life is a failure - while sitting in a room, racking their brains on how to sell diamonds that no one wanted.” (Dhar, 2013)

So What Can We Do?
As the consumer, there’s not a lot we can do with regard to GW’s business practices that we’re not already doing: voting with our feet and our dollar. Some hobbyist and gamers find that other games like Warmachine, Hordes, or Malifaux scratches the wargaming itch just fine. Others cut back on their purchases, or seek out substitute miniatures for their GW armies.

Other game companies are also cutting into the pie that is wargames spending as well. Many wargamers have started playing games like X-Wing and Attack Wing, and while some wargaming purists don’t consider X-Wing or Attack Wing a miniature wargame, I would challenge you to find a group playing either that isn’t interacting in the same manner as a deep game of Warhammer or 40k.
Additionally, you can keep playing GW games and making your weekly purchases knowing that you contribute in some small way to their business model.

In the end, the best action you can take is to follow the basic assumption of all economic principles: being an informed and intelligent consumer.

Marketplace. (22 Feb, 2013). Diamonds are not a jewel of investment. [Web page]. Retrieved from http://www.marketplace.org/topics/business/diamonds-are-not-jewel-investment.
Posted by Cliff at 3:36 PM No comments:

And by a while, I mean exactly 2 years to the date. Gah! So let's take a look at some stuff I've been working on. Mostly Malifaux.

Here are some pics from Adepticon 2014. I played in the Malifaux Masters tournament with an Arcanist crew. I didn't place, but it was fun to play with a variety of folks from around the U.S.! 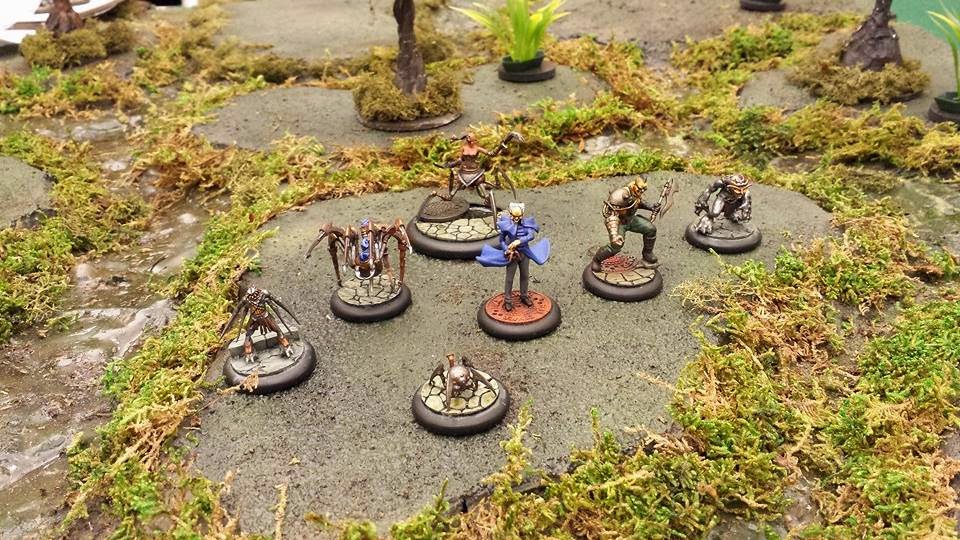 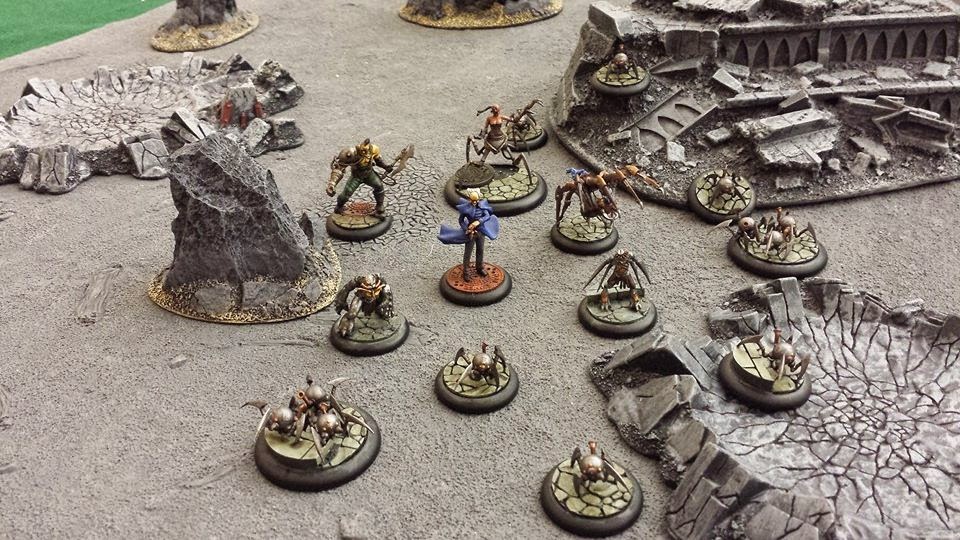 This Fall, I started working on a special character for Malifaux called The Carver. Here are a couple of WIP shots: 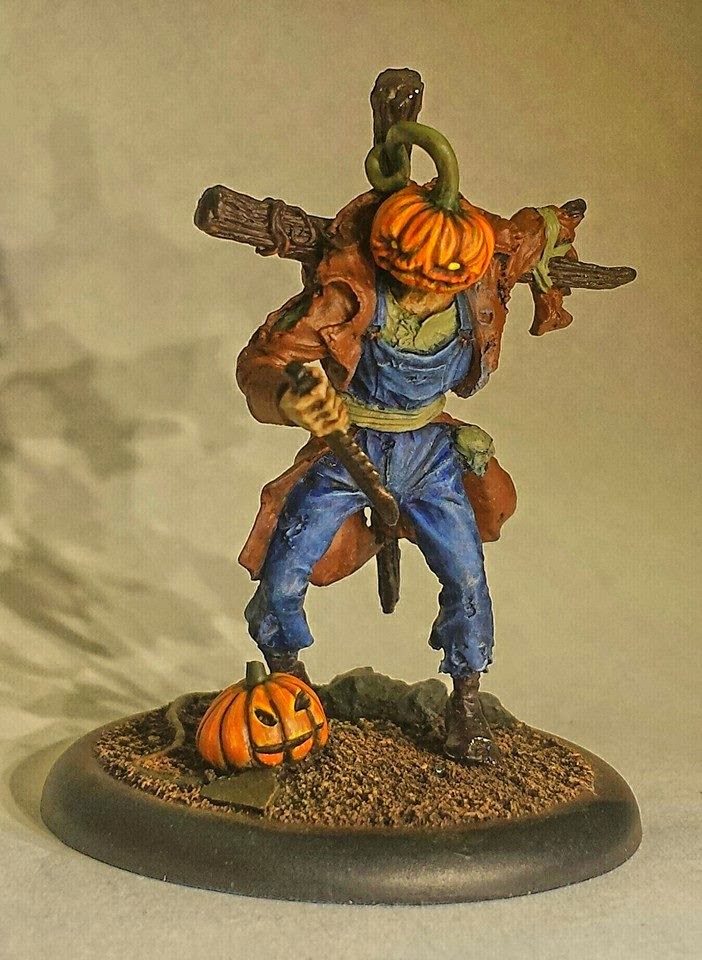 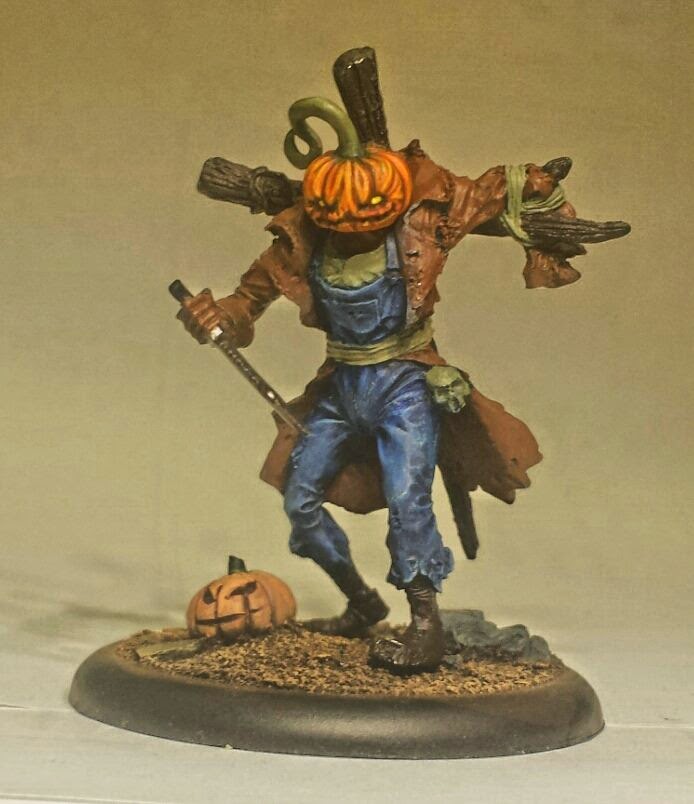 It's been a fun character piece to paint, which is one of the things I really like about Malifaux.

And here are some of the most recent things I've been working on, Von Schill's Freikorps. Essentially the biggest, baddest mercenary force in Malifaux. 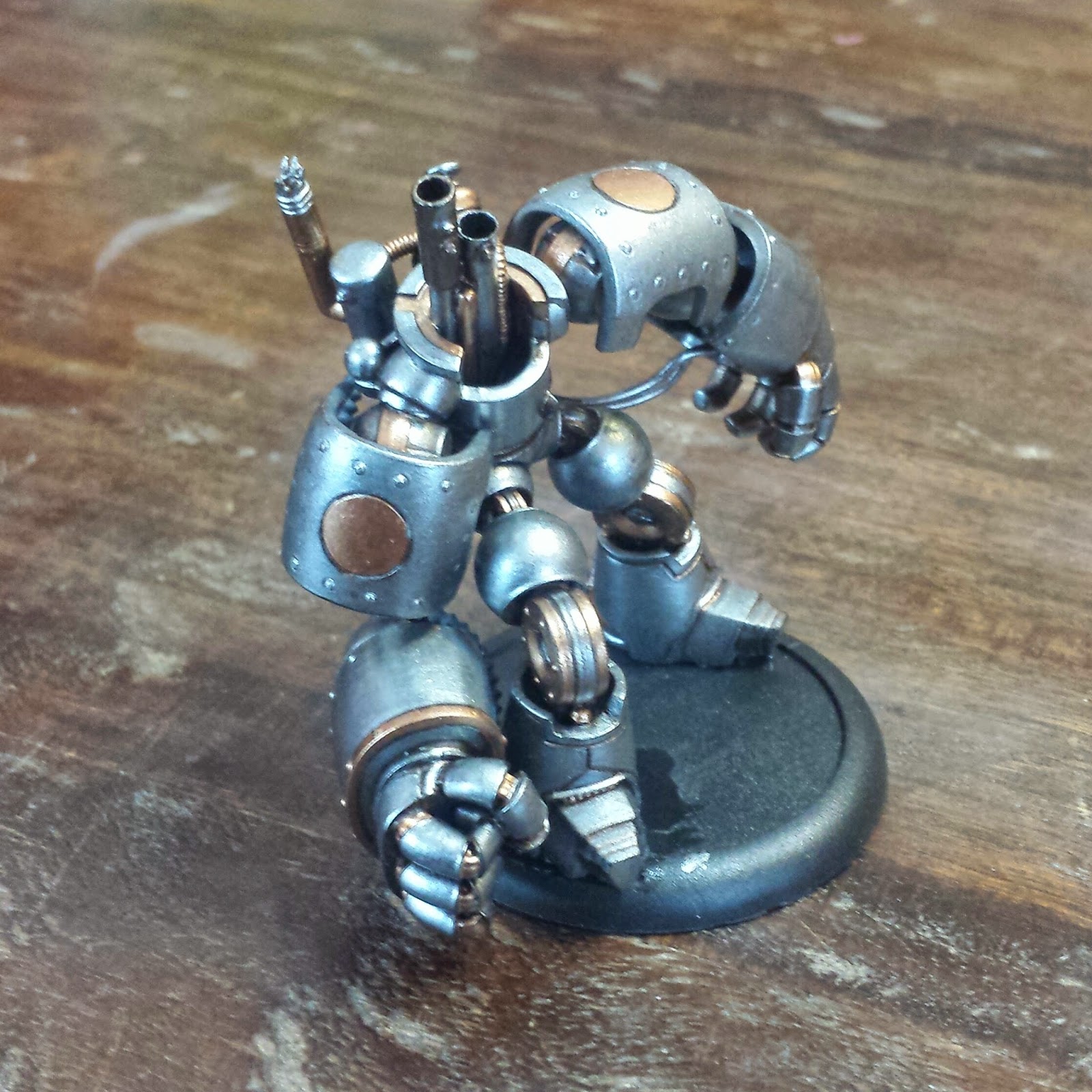 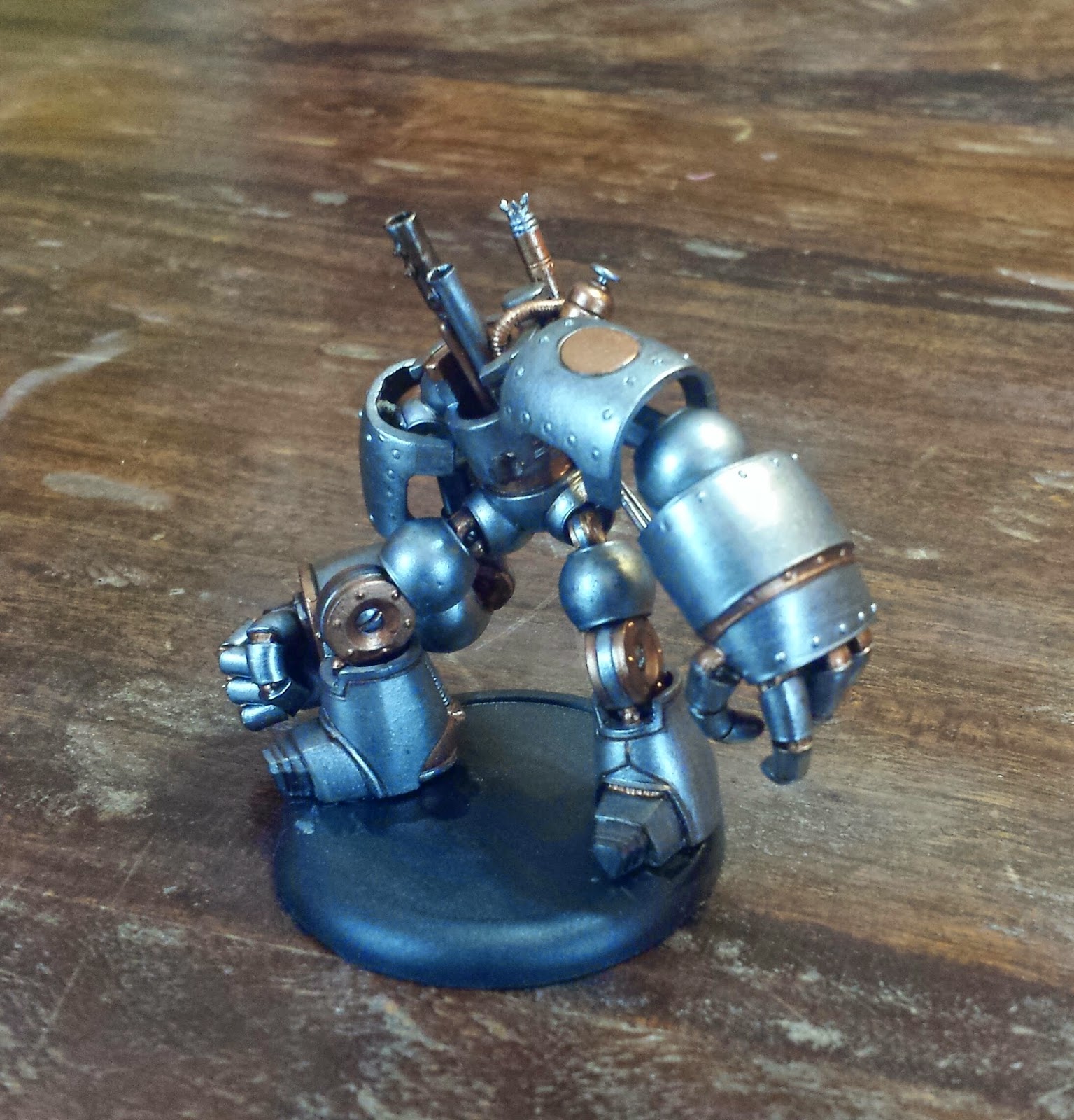 Above is Hannah's mechanized suit. I did a little bit of converting with the pipes and tubing off the central body and the boiler. Below is Hannah temporarily tacked into place to get an idea of positioning.


Here is the Steam Trunk. It's notoriously fiddly to get assembled, particularly the top of the trunk and the tracks on both sides. Instead of posing mine with the lid barely open, I wanted to show off all the detail inside of it, and since the Freikorps are a mercenary force, I figured they'd know all about bad guys on the lam. 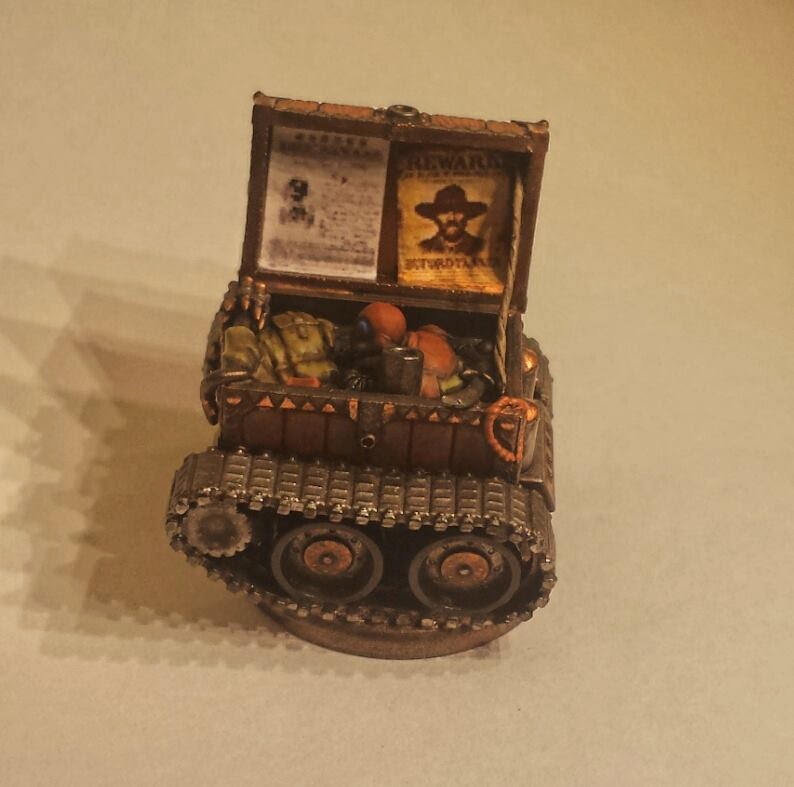 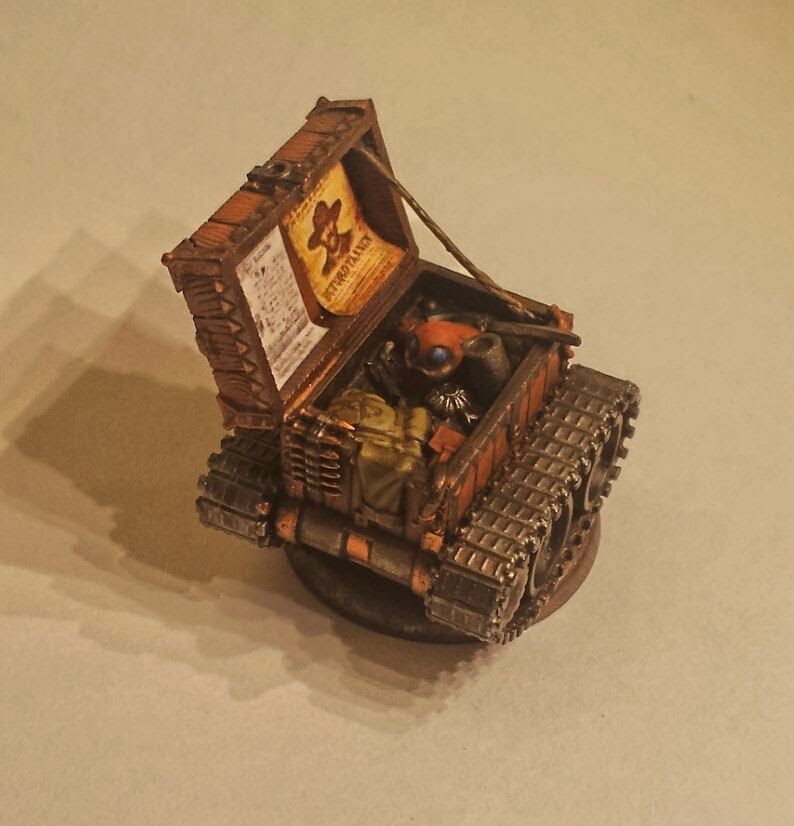 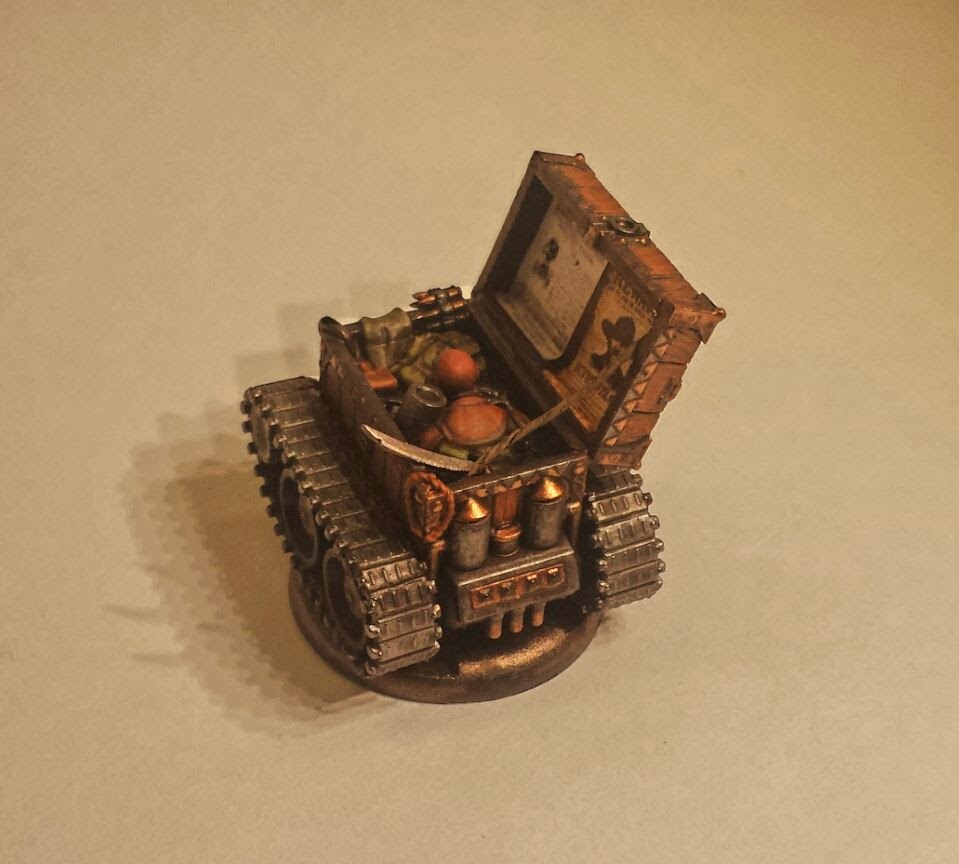 Finally, we've got the man himself, Von Schill. At this point, I've done some basic work on the fatigues, and I need to get his armor and weapons, leather, flesh and hair finalized. 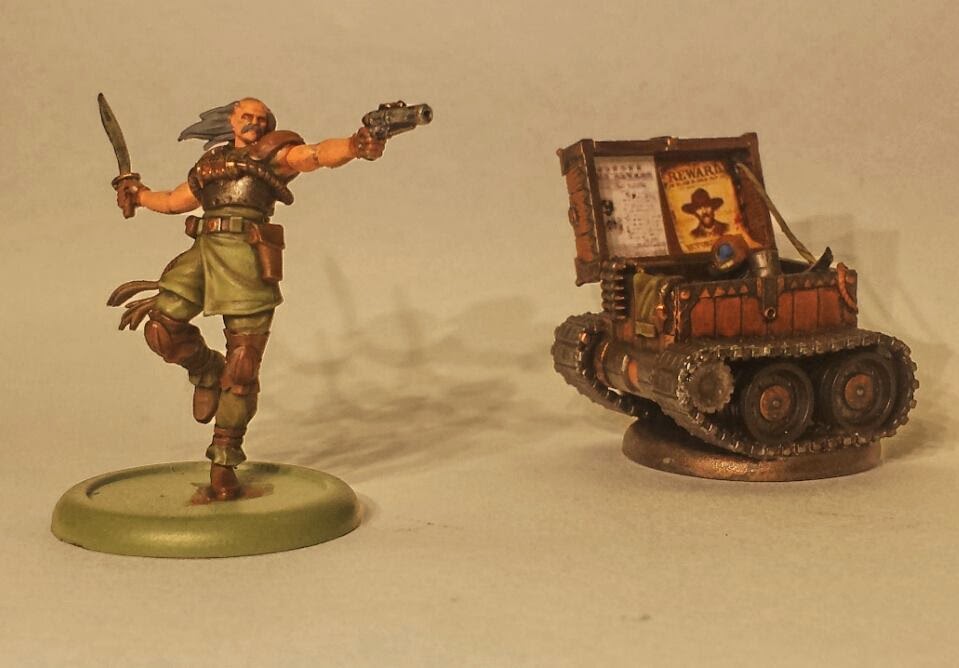 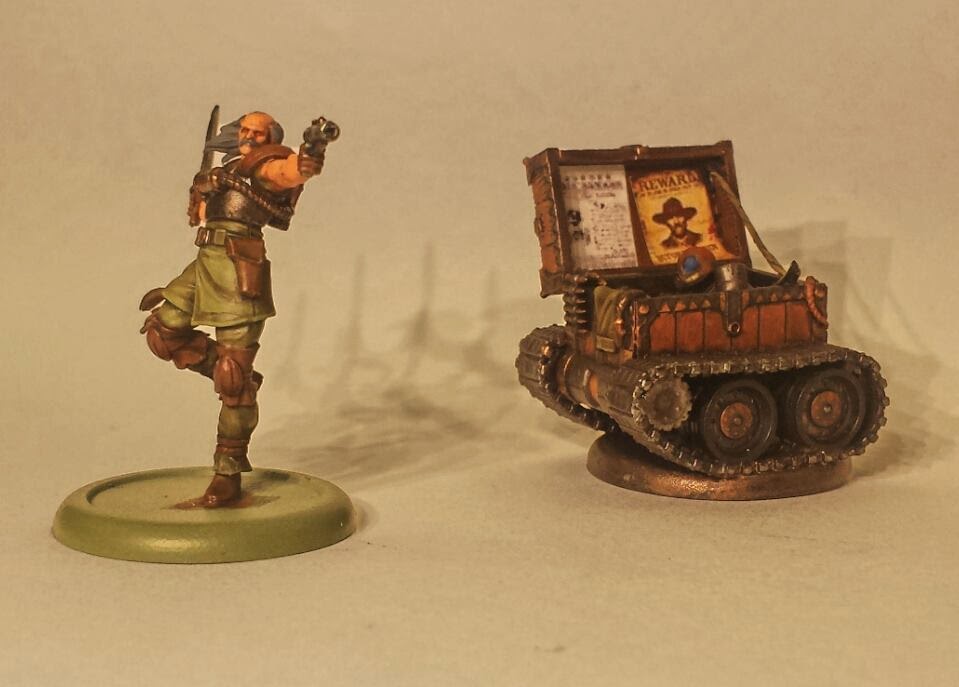 This isn't by far anywhere close to ALL the stuff I've been working on, but I wanted to at least take a small step toward getting back in the habit of posting fun gaming stuff. As usual, comments, questions, and critiques are welcome!

places i go when i should be working

followers (or as i like to call them "minions".